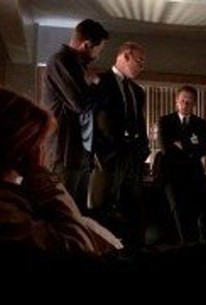 In part one of a two-part story, resurrected alien abductee Billy Miles (Zachary Ansley) shows up at the Maryland genetics lab, which Scully (Gillian Anderson) suspects of being a spawning ground for alien babies. Not long afterward, Scully's obstetrician, Dr. Parenti (Steven Anderson), dies mysteriously, and the lab goes up in flames. Investigating the incident, Mulder (David Duchovny) and Doggett (Robert Patrick) unearth new evidence concerning the unknown person responsible for impregnating Scully, as well as an assassination plot against the unborn baby. Meanwhile, with her due date rapidly approaching, Scully is under the "tender" care of nurse Lizzie Gill (Frances Fisher) -- who turns out to have a hidden agenda. The penultimate episode of X-Files' eighth season, "Essence" originally aired on May 13, 2001. 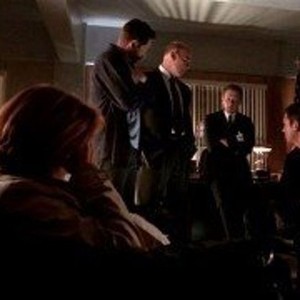