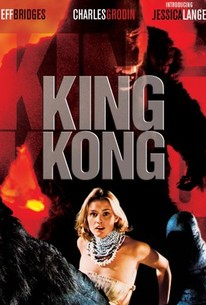 King Kong represents a significant visual upgrade over the original, but falls short of its classic predecessor in virtually every other respect.

Famed producer Dino De Laurentiis tries to steal the thunder from Jaws, then the top-grossing film of all-time, in this big budget remake of King Kong. (De Laurentiis related his tactics to Tom Snyder: "When Jaws dies, nobody cries. When Kong dies, they all cry.") Updated to the 1970s, the original Robert Armstrong character is now Fred Wilson (Charles Grodin), a big-shot oil magnate from Petrox Oil, looking for new petroleum deposits on a recently discovered Pacific island. Jack Prescott (Jeff Bridges) is a counter-culture paleontologist, stowing away on Wilson's ship, who warns that they are headed for "Skull Island," where prehistoric monsters still live and roam free. Also along for the ride is Dwan (Jessica Lange, in her film debut), a down-on-her-luck starlet, shipwrecked in the ocean after the sinking of a yacht. She really becomes down-on-her-luck when the group lands on the island and a giant ape, Kong, takes a shine to her. Kong kidnaps her and Dwan takes umbrage when the ape tries to remove her clothes by shouting, "You male chauvinist ape!" But Prescott comes to her aid and rescues her from the gorilla's big mits. Wilson, seeing money to be made on Kong, locks him in the cargo hold of his ship and transports him to New York City. Once there, Kong manages to escape and wreak havoc upon the beleaguered town, before being compelled to climb up the World Trade Center for sanctuary.