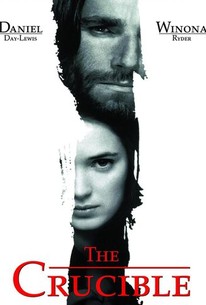 This staid adaptation of The Crucible dutifully renders Arthur Miller's landmark play on the screen with handsome production design and sturdy performances, if not with the political anger and thematic depth that earned the drama its reputation.

When Arthur Miller's play The Crucible was first staged in 1953, it was widely acclaimed as a metaphor for the recklessness of Joseph McCarthy and his spurious crusade against communism. In its 1996 screen adaptation (scripted by Miller), the tone has been adjusted somewhat and plays as a warning against the dangers of political and religious extremism of all kinds. After a group of young women is accused of witchcraft in the Puritan community of Salem, Mass. in 1692, Abigail Williams (Winona Ryder) is held in suspicion of practicing magic. Abigail in turn levels charges against John Proctor (Daniel Day-Lewis) and his wife Elizabeth (Joan Allen). Abigail has a private grudge against the Proctors; while working as their servant, she had an affair with John, and when John ended the relationship and returned to his wife, Abigail was fired. Now the Reverend Parris (Bruce Davison) is hearing accusations and counter-accusations of misdeeds from all sides of the community in the wake of Abigail's charges, so he brings in Judge Danforth (Paul Scofield) to determine who is guilty or innocent. However, given the moral climate of the time, it seems someone has to be found guilty of witchcraft, even though firm evidence of wrongdoing is becoming hard to come by. This was the second screen version of The Crucible, though it was the first one in English; the previous version, filmed in France in 1956, starred Simone Signoret and Yves Montand. ~ Mark Deming, Rovi

Will Lyman
as Isaiah Goodkind

News & Interviews for The Crucible

Now Streaming: Lawrence of Arabia, Insomnia, And More
View All

Critic Reviews for The Crucible

Audience Reviews for The Crucible