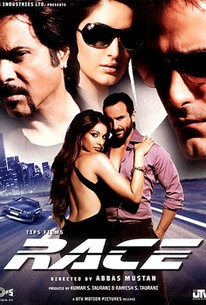 A family who make their living in the high-stakes world of horse racing fall prey to dangerous rivalries in this action drama from the sibling directing team of Abbas Burmawalla and Mustan Burmawalla. Ranvir Singh (Saif Ali Khan) runs a ranch in Durban, South Africa where he raises thoroughbred race horses and run them on the international racing circuit. Ranvir has brought up more than his share of champions, and he's made a tidy fortune through his hard work, willingness to take a chance and sheer ruthlessness. Ranvir's brother Rajiv (Akshaye Khanna) also works in the business, but he lacks his sibling's drive and prefers to drink and enjoy the spoils of success. Ranvir is dating a beautiful woman named Sonia (Bipasha Basu), but when Rajiv announces that he and Sonia have fallen in love and want to get married, Ranvir takes the news in stride and gives the couple his blessings. However, what Ranvir doesn't know is that Rajiv has more in mind than stealing his girl -- Rajiv and Sonia are planning to murder Ranvir and take charge of his empire. Race also stars Katrina Kaif as Ranvir's personal assistant and Anil Kapoor as a no-nonsense police detective.