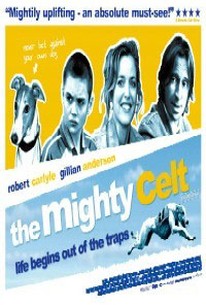 A young boy from a broken home learns the harsh realities of life after adopting an awkward greyhound and befriending a mysterious figure from his mother's past in this tender coming of age story starring Gillian Anderson, Robert Carlyle, and Tyrone McKenna. Donal (McKenna) and his single mother Kate (Anderson) share a small home in Belfast. When their finances start to dwindle, Donal goes to work for local dog trainer Good Joe (Ken Stott) to help make ends meet. Despite the benevolence that his name implies, Good Joe is anything but, and has a reputation for going back on his word. So when Good Joe recognizes Donal's special connection to dogs and offers him the "Mighty Celt" if the canine can win three races in a row, the boy is understandably wary. Things start to look up, however, as the races get underway and a man named O (Carlyle) returns to strike up a warm friendship with Donal. It's obvious from the onset that Good Joe is suspicious of O, and Donal's mother Kate makes no secret of the fact that she would rather O had never returned to town. In the aftermath of a dramatic revelation that will change the lives of all involved, young Donal learns that not all stories have a happy ending.

Sean McGinley
as I'm A Cripple

John Travers
as Spacer
View All

Critic Reviews for The Mighty Celt

Audience Reviews for The Mighty Celt