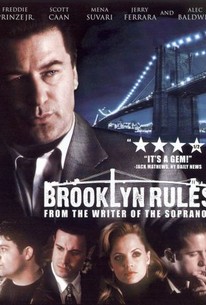 Brooklyn Rules' premise is old hat now, but strong performances from Alec Baldwin and the supporting cast are reasons enough to watch.

Director Michael Corrente's coming-of-age comedy drama Brooklyn Rules unfurls in 1985, coincident with the early rise of John Gotti. Three young Brooklyn men of Italian-American heritage -- Michael Turner (Freddie Prinze Jr.), Carmine Mancuso (Scott Caan), and Bobby Canzoneri (Jerry Ferrara) -- make the pivotal, potentially irreversible choices that will determine their directions in life. The boys' periodic run-ins with a sadistic mobster type who rules the neighborhood, Caesar Manganaro (Alec Baldwin), suggest the ever-present option of drifting into a career of crime. On the surface, Michael courageously and doggedly bucks this choice, opting instead for the pre-law program at Columbia and a straight-laced romance with blonde-haired, blue-eyed coed Ellen (Mena Suvari), yet this path is not as antiseptic as it may seem, for he actually scammed his way into the law program. Meanwhile, Carmine idolizes Caesar, and his desire to emulate this thug not only compromises his own moral integrity, but threatens to jeopardize the stability of Michael's life as well by drawing him into a sticky web of criminal activity. While the first two men navigate these treacherous paths, the third friend, Bobby, stakes out safer ground with a low-key job at the post office and married life with his intended. Over the course of it all, the boys' bonds of friendship become stressed and strained given the divergence of their paths. ~ Nathan Southern, Rovi

Critical Consensus: Third Time’s Not the Charm for "Shrek"
View All