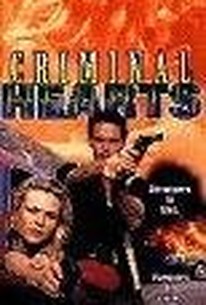 Young lovers accused of robbing stores and killing their owners flee across the West. Their ordeal begins after Keli (Amy Locane) has a fight with her mother and takes off. Seeing Rafe (Kevin Dillon) thumbing a ride, and not realizing that he has just robbed a gas station, she decides to pick him up. Something clicks between them and after a bottle of wine and a bout of lovemaking they become a couple. The only dark moment comes when Keli discovers a gun underneath Rafe's pillow. She soon learns that he is indeed a robber, but that he has only been stealing drug money from crooked merchants. When the news announces that he is also wanted for killing the storekeepers, the couple realize that they are in big trouble and take off. They are pursued by two FBI men, both of whom have sinister ulterior motives for catching Rafe and Keli before any other law-enforcement personnel.

There are no critic reviews yet for Criminal Hearts. Keep checking Rotten Tomatoes for updates!

There are no featured audience reviews for Criminal Hearts at this time.