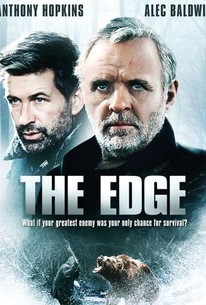 The Edge is an entertaining hybrid of brainy Mamet dialogue with brawny outdoors action -- albeit one that sadly lacks as much bite as its furry antagonist.

Billionaire Charles Morse (Anthony Hopkins) accompanies his much-younger wife Mickey (Elle Macpherson) and a fashion photography team headed by Bob Green (Alec Baldwin) to a remote lodge in Alaska. Charles is a quiet, introspective man, fond of accumulating trivia and other facts in his encyclopedic mind; he is also troubled with the idea that Bob and Mickey may be lovers. Even though he suspects the younger man plans to kill him, Charles goes with Bob and his assistant Stephen (Harold Perrineau) on an airplane trip to find a photogenic friend (Gordon Tootoosis) of the lodge owner (L.Q. Jones), but the plane crashes in a lake, killing the pilot. The crash is miles from their planned path, so they can't expect to be spotted by an aerial search; there's only one chance: they have to walk to a more likely spot.Though Robert and Stephan are more physically fit, Charles' calm wit and ingenuity proves the key to their survival, especially after a ferocious bear brutally kills Stephen. Robert and Charles' odyssey becomes more urgent when they discover that the bear is now stalking them. ~ Bill Warren, Rovi

Bart the Bear
as the bear
View All

Critic Reviews for The Edge

Audience Reviews for The Edge