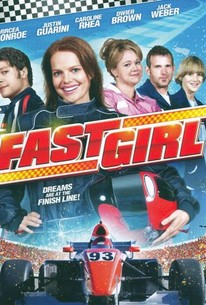 Determined to make a name for herself in the male dominated sport that recently claimed the life of her talented father, a female race car driver with a lead foot and love for speed punches the gas and never looks back in this family-oriented sports drama starring Mircea Monroe and Justin Guarini. Ever since she was just a young girl, Alex Johnstone (Monroe) knew that she was destined to become a true racing champion. But Alex's uncle Bill (Dwier Brown) is the man in charge of the local speedway, and there's no way he's going to lose another relative on the racetrack. As determined as Bill is to prevent his niece from crashing and burning, however, Alex is equally resolute in proving that she has what it takes to keep pace with the best male drivers around. Later, as Alex becomes involved with a professional racecar driver (Guarini) who has a reputation for always crossing the checkered flag first, the young girl's conflict proves much more complex than simple black and white.

There are no featured audience reviews for Fast Girl at this time.