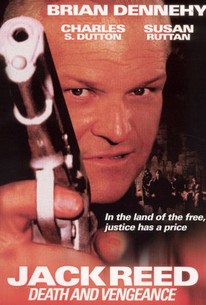 In this fifth TV movie based on the character of incorruptible Chicago detective Jack Reed, Brian Dennehy once again wears two hats as both star and director. A multiple murder has occurred in a suburban cemetery in broad daylight. Most of the victims are Russian immigrants, whose friends and relatives refuse to cooperate in the investigation conducted by Jack Reed (Dennehy). As he pursues the case, Reed learns that the central figure in the mystery is a militant Russian who is organizing several of his fellow émigrés into his own army. Meanwhile, Reed must also contend with influential mayoral candidate Gordon Thomas (Joe Morton), whose minions are strong-arming the department to drop vehicular homicide charges against his son. Despite his tawdry surroundings, Reed retains his patented wicked sense of humor, especially when reciting the required Miranda rights while cuffing perpetrators ("You've got the right to cable TV, and the right to free counseling by Susan Sarandon and Tim Robbins.") Jack Reed: Death and Vengeance made its NBC debut on November 17, 1996.

Ned Vukovic
as Igor
View All

There are no critic reviews yet for Jack Reed: Death and Vengeance. Keep checking Rotten Tomatoes for updates!

There are no featured audience reviews for Jack Reed: Death and Vengeance at this time.