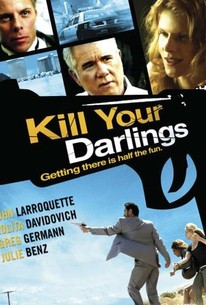 A man fascinated with the process of ending one's own life meets some rather disturbing kindred spirits in this dark comedy. Erik (Andreas Wilson) is a commercial photographer and would-be screenwriter who has left his native Sweden to come to Hollywood in hopes of selling his latest script. Erik quickly discovers there isn't much of a market for stories about suicide in Tinseltown, and he's looking for new inspiration when he meets Lola (Lolita Davidovich), a beautiful but wildly unpredictable woman who lures him into joining her on a road trip to Las Vegas. As it happens, Lola is drawn to Vegas by the presence of Dr. Bangley (John Larroquette), a psychologist and television chat-show host who is publicizing his latest book in Sin City -- "Stay Alive," a guide for those contemplating suicide. As part of the book launch, Bangley is arranging for a number of his more colorful patients to meet him in Las Vegas, where they'll take part in a television reality show hosted by the doctor. The clients include Katherine (Julie Benz), who has been suffering from depression since losing custody of her son; Geert (Alexander Skarsgård), a troubled cross-dresser; and Ella Toscana (Terry Moore), an elderly former movie star with remarkable mood swings. Bangley also has to deal with his teenage daughter, Sunshine (Skye McCole Bartusiak), who is willing to do anything to get her busy dad's attention. As Erik crosses paths with Bangley's entourage, he's confronted with people who are even more obsessed with killing themselves than the average Swede, and feels as if he fits in until gangster and part-time limo driver Omar (Fares Fares) reveals his sinister side. Kill Your Darlings received its North American premiere at the 2006 Tribeca Film Festival.

Critic Reviews for Kill Your Darlings

Audience Reviews for Kill Your Darlings

There are no featured audience reviews for Kill Your Darlings at this time.