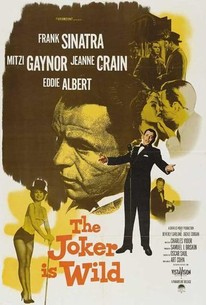 The Joker Is Wild

The Joker Is Wild Photos

Frank Sinatra offers one of his better performances as the troubled but popular 1920s-era Chicago nightclub singer and comic Joe E. Lewis in this tuneful biopic. Joe's career as a singer is going fine until he derails it all by politely refusing to do a gig at a rival club. Unfortunately, that club is run by Al Capone and he doesn't like to see his offers refused and so sends out his boys to teach Lewis a lesson. They catch him and slit his throat. Lewis survives, but during the trauma his vocal cords were almost destroyed and he can no longer sing. Once healed, Lewis works on becoming a comedian and thanks to the help of Sophie Tucker succeeds. Along the way, he falls in love with a socialite and a chorus girl. He marries the latter, but secretly loves the socialite. Despite his success at work, Lewis becomes despondent and eases his pain with plenty of alcohol. As his drinking increases, the quality of his patter diminishes, but still he remains popular but only because he is an entertainingly pathetic and obnoxious drunk. When he takes his act home once too often, his disgusted wife takes a powder, as does his best friend who can no longer stand by and watch Lewis destroy himself. Fortunately, Lewis bottoms out soon afterward, quits the booze and opts for making amends to those he most loves.

Sophie Tucker
as Herself

Eric Alden
as Doorman at Copacabana

Kit Guard
as Doorman of the Valencia

Arthur Lewis
as Man in Hotel Suite
View All

Critic Reviews for The Joker Is Wild

Audience Reviews for The Joker Is Wild

The Joker Is Wild Quotes