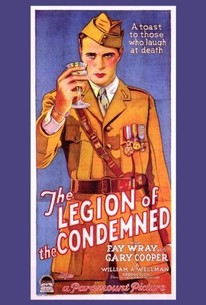 The Legion of the Condemned Photos

Director William Wellman's follow-up to Wings was based in part on his own WWI experiences with the Lafayette Flying Corps. Four young men from various walks of life sign up for the French escadrille known as "The Legion of the Condemned." In essence, all four are running away -- from the law, from love, from themselves. Whenever a suicide mission comes up, the four men draw cards to see who will fly off to near-certain doom. With his best friend Byron Dashwood (Barry Norton) already haven died in combat, Gale Price (Gary Cooper) waxes fatalistic when he draws the high card next time around. As he prepares to drop a spy behind enemy lines, Gale flashes back to the events leading up to this moment -- specifically, to his ill-fated romance with Christine Charteris (Fay Wray), whom he has been led to believe is a German spy. Returning to the present, Gale discovers that his passenger is Christine, who is actually an operative in the French secret service. Before explanations can be exchanged, Gale is obliged to fly Christine to her rendezvous point. She is arrested as a spy and sentenced to be executed but is saved when the firing squad is decimated by a bombing raid, paving the way for a tender reunion with Gale. The screenplay for Legion of the Condemned was written by Wellman and his Wings collaborator John Monk Saunders.

Critic Reviews for The Legion of the Condemned

Audience Reviews for The Legion of the Condemned

The Legion of the Condemned Quotes