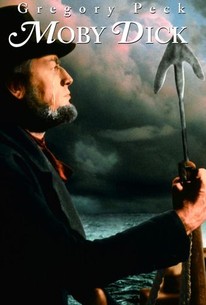 It may favor spectacle in place of the deeper themes in Herman Melville's novel, but John Huston's Moby Dick still makes for a grand movie adventure.

Previous film versions of Moby Dick insisted upon including such imbecilities as romantic subplots and happy endings. John Huston's 1956 Moby Dick remains admirably faithful to its source. "Call me Ishmael" declares itinerant whaler Richard Basehart as the opening credits fade. Though slightly intimidated by the sermon delivered by Father Mapple (Orson Welles in a brilliant one-take cameo), who warns that those who challenge the sea are in danger of losing their souls, Ishmael nonetheless signs on to the Pequod, a whaling ship captained by the brooding, one-legged Ahab (Gregory Peck). For lo these many years, Ahab has been engaged in an obsessive pursuit of Moby Dick, the great white whale to whom he lost his leg. Ahab's dementia spreads throughout the crew members, who maniacally join their captain in his final, fatal attack upon the elusive, enigmatic Moby Dick. Screenwriter Ray Bradbury masterfully captures the allegorical elements in the Herman Melville original without sacrificing any of the film's entertainment value (Bradbury suffered his own "great white whale" in the form of director Huston, who sadistically ran roughshod over the sensitive author throughout the film).Cinematographer Oswald Morris' washed-out color scheme brilliantly underlines the foredoomed bleakness of the story. Moby Dick's one major shortcoming is its obviously artificial whale-but try telling a real whale to stay within camera range and hit its marks. ~ Hal Erickson, Rovi

Iris Tree
as Lady with Bibles
View All