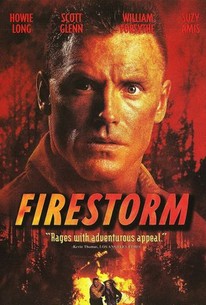 Firestorm failed to ignite ex-pro footballer Howie Long's career...or anything else for that matter.

This Chris Soth screenplay is directed by Dean Semler, the Oscar-winning Dances With Wolves cinematographer who also did cinematography for Waterworld and Last Action Hero. The film's action hero is Howie Long (Broken Arrow), Fox Sports commentator and former NFL star. Wyoming firefighter Jesse Graves (Long) leads a team of smoke-jumpers who parachute into forest fires. Inside a penitentiary, killer Earl Shaye (William Forsythe) devises an escape plan in order to recover a hidden $37 million. He murders a fellow inmate and takes his place in a group of convicts headed out to fight a forest fire. They make an escape, pose as visiting Canadian firefighters, and are ready to look for the loot when retired firefighter Wynt (Scott Glenn) discovers the escape. Shaye's group rescues trapped ornithologist Jennifer (Suzy Amis, Titanic's Lizzy Calvert). Jesse parachutes in, but time is running out, since the original fire and the backfire will soon combine to create a firestorm. Filmed on location in British Columbia with fire-enhancement special effects by Chris Corbould. Not to be confused with Firestorm: 2024 A.D. (1996) or Firestorm: 72 Hours in Oakland (1993). ~ Bhob Stewart, Rovi