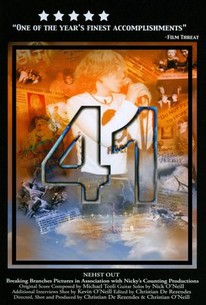 The evening of February 20, 2003 went down in infamy for the residents of Rhode Island. On that fateful night, a fire erupted at a popular West Warwick nightspot christened The Station. The blaze ultimately claimed the lives of 100 people - rendering it the fourth deadliest nightclub fire in American history. But the full story only began there - and found some closure approximately one year later. This closure took shape in early 2004, the members of a Woonsocket, Rhode Island community theater gathered to produce a play entitled They Walk Among Us, authored by the youngest of the many victims, Nicky O'Neill. As co-helmed by two men - Christian de Rezendes and the playwright's brother, Christian O'Neill - the documentary 41 tells the incredible story of Nicky O'Neill's life as a blossoming actor, musician and belletrist, and explores how he sought to use They Walk Among Us to impart spiritual hope to thousands of playgoers, with an emotional impact that still lingers long after the writer's untimely death.

There are no critic reviews yet for 41. Keep checking Rotten Tomatoes for updates!

There are no featured audience reviews for 41 at this time.