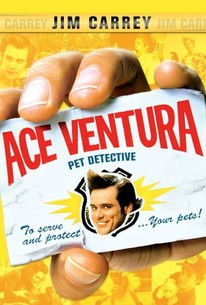 Jim Carrey's twitchy antics and gross-out humor are on full, bombastic display in Ace Ventura: Pet Detective, which is great news for fans of his particular brand of comedy but likely unsatisfying for anyone else.

When your dog, bird, or water-dwelling mammal disappears, who do you call? Ace Ventura (Jim Carrey) is a low-rent private eye who specializes in recovering lost animals, so when Snowflake, the Miami Dolphins' aquatic mascot, is kidnapped, team representative Melissa Robinson (Courtney Cox) puts Ace on the case. However, Snowflake isn't the only Miami Dolphin who has gone missing; several key members of the team also disappear, including quarterback Dan Marino (who plays himself), who is spirited away while filming a TV commercial. With the Super Bowl only two weeks away, will Ace be able to find Snowflake and the missing athletes in time to salvage the big game? Ace Ventura: Pet Detective was a surprise box office smash and catapulted manic comedian Jim Carrey to stardom. The supporting cast includes Sean Young as ill-tempered Lois Einhorn, Udo Kier as the sinister Ronald Camp, and rapper Tone Loc as Ace's detective pal Emilio (Loc also wrote and performed a song for the closing credits). ~ Mark Deming, Rovi

Dan Marino
as Himself

Will Knickerbocker
as Manager

Chaz Mena
as Another Cop

Don Shula
as Himself

Scott Mitchell
as Himself

Peter Stoyanovich
as Himself

Dwight Stephenson
as Himself

Jeff Dellenbach
as Himself

Marco Coleman
as Himself

Jeff Cross
as Himself