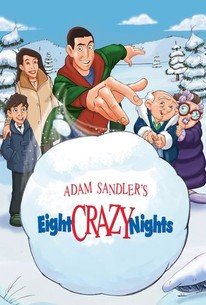 Sandler returns to his roots in this nauseating concoction filled with potty humor and product placements.

2:21
Adam Sandler's Eight Crazy Nights: Official Clip - But That Was Long Ago

Davey Stone is a young man who hates the holidays and is determined that no one else in the town of Dukesberry is going to enjoy them either. On the first night of Hanukah, the perpetually grumpy Davey goes on a rowdy rampage and is arrested. Since this is hardly the first time he's gone on a destructive binge, the town sentences Davey to ten years in prison. It is only through the intercession of a kindly old codger named Whitey that Davey is spared. Whitey, a local basketball ref, agrees to take responsibility for Davey, who is ungrateful. Though Whitey suffers Davey's foul temper and bad attitude with good humor, others are less sympathetic, particularly his childhood sweetheart Jennifer, who has returned to Dukesberry with her son Benjamin. When Davey's mobile home burns down, he is forced to move in with Whitey and his kvetchy sister, Eleanor. The familial atmosphere softens Davey, somewhat, until they tap into his painful past. He turns on Whitey and Eleanor and goes off on a boisterous tear. It is only by confronting the ghosts of holidays past, and an act of selfless kindness, that Davey is able to overcome his demons and enjoy the holidays again.

John Farley
as Cop No. 2

Jonathan Loughran
as Cop No. 1