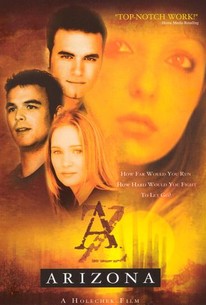 In the tradition of the bestselling memoirs, Maria Flook's My Sister Life and Jennifer Egan's Invisible Circus, comes the haunting coming-of-age melodrama Arizona, a film by the Holechek Brothers. Like the Flook and Egan stories, Arizona begins with the fog-shrouded evaporation of a sister. During the summer that follows her high school graduation, eighteen-year-old Kayden Watts (Heaven Peabody) is plagued by the unknown fate of kid sis Tamarah, who vanished from home without a trace. As an added strain, Kayden looks ahead to the fall that lies before her, when boyfriend Bryan Teller (Mike Elling, Days of our Lives) will head off to college in Massachusetts. As Kayden sets out to find Tamarah and solve the mystery of her absence, Bryan is suddenly confronted by a ghost from his own past: his issue ridden older brother resurfaces at the house demanding that Bryan rescue him from poverty and emotional seclusion. Suddenly, Kayden and Bryan must each overcome the obstacles that fate has laid in their paths. David Holechek wrote the original script and executive produced; he and brother Daniel co-direct.

David Moretti
as Jared
View All

There are no critic reviews yet for Arizona. Keep checking Rotten Tomatoes for updates!

There are no featured audience reviews for Arizona at this time.