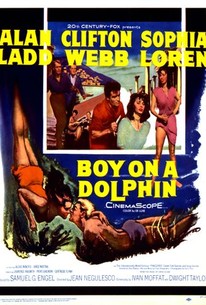 Boy on a Dolphin

Italian goddess Sophia Loren makes her American feature-film debut in this thriller set upon the Greek island of Hydra. There in a seaside village a beautiful sponge diver finds an ancient sunken ship. Within, she finds a breath-taking brass statue of a boy riding a dolphin. Excited by the wonderful treasure, she tells her slimy boyfriend about it. The conniving fellow convinces her to help him use the priceless artifact to pad their pockets. Together the two head for a Greek museum and look up a noted Yankee archaeologist. Upon hearing of the find, he demands that they turn the treasure over to the government. The boyfriend sneaks away and then makes a deal with a wealthy art-collector and together they begin plotting how they can secretly retrieve the booty. At first the sponge diver goes along with her lover's schemes, but after a few key events, she realizes that she has fallen in love with the archaeologist and also realizes that he is right; the treasure belongs to Greece. But now they must get to the treasure first lest it be lost forever.

Charles Fawcett
as Bill B. Baldwin

Orestes Rallis
as Chief of Police

Critic Reviews for Boy on a Dolphin

Audience Reviews for Boy on a Dolphin

Boy on a Dolphin Quotes