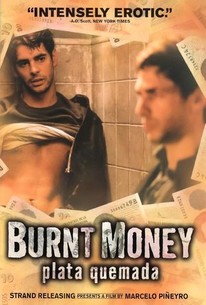 Burnt Money tells a stylish and steamy story about criminals on the lam.

Love and betrayal complicate a robbery gone wrong in this offbeat crime thriller shot in Argentina. Angel (Eduardo Noriega) and El Nene (Leonardo Sbaraglia) are a pair of small-time criminals hired to take part in the robbery of an armored truck organized by mobsters Nando (Carlos Roffe) and Fontana (Ricardo Bartis), who working in cahoots with the driver, El Cuervo (Pablo Echarri). Angel and El Nene are also lovers, and when the robbery goes sour and Angel is shot by the police, El Nene is enraged and opens fire on the officers, turning the heist into a bloodbath. Angel and El Nene somehow escape and go into hiding, with El Nene attempting to nurse Angel back to health. As the couple tries to avoid detection in Uruguay, El Cuervo's moll, Vivi (Dolores Fonzi), tells the police of their whereabouts under threat of torture. Meanwhile, beginning to crack under cabin fever, Angel and El Nene slip into town to visit a carnival, where El Nene's head is unexpectedly turned by Giselle (Leticia Bredice), sparking murderous jealousy in Angel. Plata Quemada was adapted from a novel by Ricardo Piglia, which was inspired by a true story.