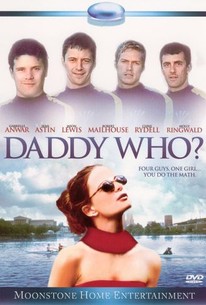 In this comedy, teamwork takes on a new meaning when four friends fall in love with the same woman. Four guys with an interest in competitive rowing -- ad executive Scott (Jason Lewis), architect Michael (Chris Rydell), stockbroker Bob (Sean Astin), and college professor Walter (Robert Mailhouse) -- decide their crew needs some help. They learn that the daughter of an Olympic rowing champion lives in town, and she's no slouch at the sport herself. The four approach Kimberly (Gabrielle Anwar) and discover that she happens to be a very beautiful woman; for the sake of the team, all four make a solemn vow not to make any romantic overtures to Kimberly while they're in training, but predictably the flesh is weaker than the spirit and all four end up dating her at one time or another. The real dilemma comes when Kimberly becomes pregnant, and she isn't sure which one of the four men is the father. Rather than fight, all four take turns guiding Kimberly through pregnancy and childbirth as she continues to guide the rowing team. The supporting cast includes appearances by Patty Duke as a doctor and Molly Ringwald as Walter's significant other.

Fenton Lawless
as Patrick
View All

Critic Reviews for Daddy Who? (Kimberly)

There are no critic reviews yet for Daddy Who? (Kimberly). Keep checking Rotten Tomatoes for updates!

Audience Reviews for Daddy Who? (Kimberly)

There are no featured audience reviews for Daddy Who? (Kimberly) at this time.