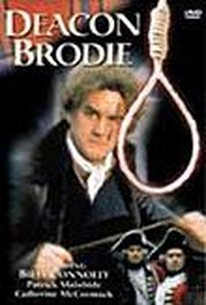 A man raised in a prominent family turns out to have a few vices not everyone knows about in this historical drama tinged with dark humor. William Deacon Brodie (Billy Connolly) was a respected town councilor and a hard-working carpenter in Scotland in the late 18th century, but his friends and neighbors discovered Brodie was leading a double life when he was caught trying to rob Edinburgh's Customs and Excise office of a large sum of money. As Brodie stood trial for theft, it became clear that this was hardly the first step in Brodie's life of crime; he was a gambler, had a powerful thirst for alcohol, consorted with prostitutes, and often robbed to cover his debts. Soon Brodie found himself on trial for his life, facing execution on the town's gallows which he helped to build. Deacon Brodie also stars Patrick Malahide, Catherine McCormack, and Ewan Bremner. ~ Mark Deming, Rovi

There are no critic reviews yet for Deacon Brodie. Keep checking Rotten Tomatoes for updates!

There are no featured audience reviews for Deacon Brodie at this time.