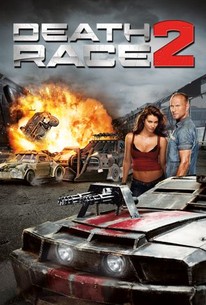 Luke Goss, Ving Rhames, Sean Bean, and Danny Trejo headline director Roel Reiné's thrill-ride sequel to Paul W.S. Anderson's hyper-violent remake exploring the origins of the most notorious Death Race competitor ever to take the wheel. Featuring a screenplay by Tony Giglio (Chaos), Death Race 2 follows convicted cop-killer Carl Lucas (Goss) as he vies for freedom by competing in the most deadly reality show ever conceived. The U.S. economy has completely collapsed, and as lawlessness spreads, private prisons crop up all across the country. Corruption reigns in these for-profit penitentiaries, and Terminal Island is home to some of the most violent offenders in the world. Lucas has just been handed a life sentence for killing a cop. Just when it looks like he'll be spending the rest of his days behind bars, unscrupulous television producer September Jones shows up seeking contestants for a brutal new game show where prisoners battle it out in high-performance death machines equipped with lethal weapons. The reward for surviving this psychotic demolition derby: freedom. Before long Lucas is fastening his seat belt, and preparing for the ride of his life. By the time this race is over, an apocalyptic legend will be born. ~ Jason Buchanan, Rovi

Joe Vaz
as Rocco
View All