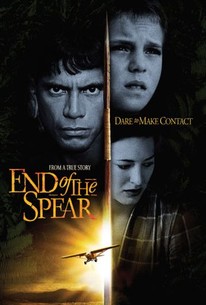 End of the Spear

Shoddy filmmaking and a lack of character development derail what could be a potentially compelling tale.

An indigenous people are turned from a life of violence to a more gentle and forgiving nature in this adventure drama based on a true story. Nate Saint (Chad Allen) is a pilot and Christian missionary who, with his family, lives and works in the jungles of South America near the Amazon. Nate is fascinated by tales he's heard of the Waodani, a violent and aggressive tribe living nearby, and with a group of fellow Christians takes it upon himself to teach them the importance of compassion and forgiveness. However, the leader of the Waodanis, Mincayani (Louie Leonardo), does not trust the white visitors, and believes they may have had something to do with the disappearance of a young girl from his tribe years ago. A meeting between Nate and Mincayani goes terribly wrong thanks to Nate's inability to understand the Waodani language, and Nate and four of his fellow missionaries are savagely murdered by the tribesmen. However, in the final moments of his life, Nate is able to impart a message in Mincayani that bears fruit years later when Steve Saint, Nate's son (also played by Allen) returns to continue the work his father started. End of the Spear was adapted from the true story of Nate Saint and Steve Saint, which was previously brought to the screen in the documentary Beyond the Gates of Splendor. ~ Mark Deming, Rovi

News & Interviews for End of the Spear

Critic Reviews for End of the Spear

Audience Reviews for End of the Spear

End of the Spear Quotes