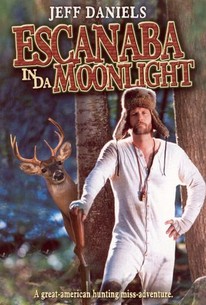 The first day of deer hunting season may be a rite of passage for many hunters across the Midwest, but nowhere more so than in the small Michigan town of Escanaba -- or so this comedy from writer/director/star Jeff Daniels would have you believe. Daniels plays Rueben Soady, a dim hunter slouching through middle age, ostracized by the men in his family for his annual inability to "bag a buck." Rueben's venison envy reaches a fever pitch on the eve of hunting season, when he joins his father Albert (Fargo's Harve Presnell) and his brother Remnar (Joey Albright) at the family cabin for their yearly, alcohol-soaked ritual of tall tales and one-upmanship. Rueben is determined to make this year different, however, whether by means of ingesting a heady, Native American good-luck potion or dousing himself in porcupine urine in order to attract a stag or two. Otherworldly forces conspire to keep the Soady men from achieving their goals, however: Soon after they set up camp, they're plagued by blinding lights and hallucinogenic visions, imparted to them -- presumably -- by UFOs. When a babbling, traumatized park ranger (Randall Godwin) arrives on their doorstep, the Soadys know that their evening is about to become stranger still, and Rueben's hopes of living down his reputation as a "buckless" man are all but dashed. The first effort from Daniels' Purple Rose Films company, the independently produced and distributed Escanaba is based upon a stage play that premiered at the actor's Purple Rose Theater in Chelsea, MI, before touring various venues in the Midwest.

Phillip Powers
as Hunter in Diner