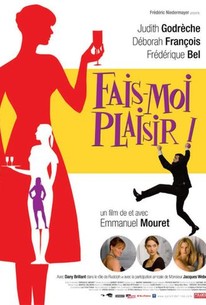 Suggesting a French equivalent of a Maurizio Nichetti film, this slapstick farce was written and directed by Euro superstar Emmanuel Mouret, who (as in his five prior efforts) also plays the comic lead. He's Jean-Jacques, a nitwit inventor whose sole obsession in life involves chasing and seducing women. Meanwhile, he's just perfected his latest invention, an erasable magic marker that comes in handy at several unexpected times. When his girlfriend, the sexy blonde nurse Ariane (Frederique Bel) passes up intimacy with him several times in a row, he tries to taunt her by telling her about an inventive pick-up method that he used on Elisabeth (Judith Godreche), an attractive but enigmatic conquest whom he met in a café. Initially miffed, Ariane encourages him, sans hesitation, to draw on everything he's got to seduce and sleep with Elisabeth; Jean-Jacques complies. He doesn't realize, however, that Elisabeth is the daughter of the president of France (Jacques Weber). This, in turn, sets up a number of situations where Jean-Jacques attempts to be suave and slick in his seduction of the first daughter, but only succeeds at triggering one outrageous catastrophe after another.

There are no critic reviews yet for Fais-moi plaisir!. Keep checking Rotten Tomatoes for updates!