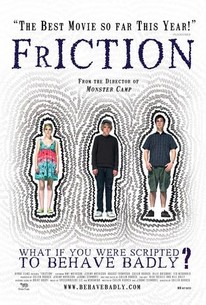 Filmmaker Cullen Hoback blurs the boundary lines between drama and documentary in a story that allows characters to interfere with the real lives of the actors who play them. Hoback was hired to teach a course on filmmaking at a summer camp run by Jeremy Mathison and his wife Amy Mathison. As part of the class, Hoback and his students would make a feature-length film, and he struck upon the idea of casting Jeremy and Amy as Jeremy and Amy, a couple who run a summer camp. One of the campers, a teenager named August Thompson, was chosen to play August Thompson, a teenager who attending Jeremy and Amy's camp. Then Hoback threw a spanner into the works by having August become romantically involved with Amy, and as Hoback's characters began behaving in an ugly manner, the people who were their real life counterparts found themselves having a hard time separating the anger and confusion that was part of the story from their feelings in real life. In Friction, Hoback moves back and forth between footage he shot at the summer camp and behind the scenes interviews as the actors and their characters started running in an uncomfortable parallel. Friction received its world premiere at the 2010 Cinequest Film Festival.

There are no featured audience reviews for Friction at this time.