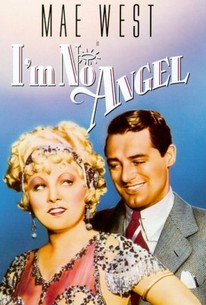 Mae West's second starring vehicle, I'm No Angel casts the divine Miss West as the star performer in a seedy circus. Though she lives with Ralf Harolde, West allows herself plenty of time for other men. When Harolde runs afoul of the law, West secures extra money by becoming a lion tamer. While thus employed, West is "discovered" by playboy Kent Taylor; she willingly accepts his gifts and other favors, but she only has eyes for Taylor's cousin Cary Grant. Still, love takes second place to commerce in West's life, and she ends up suing Grant for breach of promise. When Grant allows her to win the case, she realizes she's truly in love with him after all. By rights, I'm No Angel should have been as big and bawdy a success as West's earlier She Done Him Wrong, but by late 1933 the censors were beginning to have their way with Hollywood. Several of the more ribald (and more hilarious) elements of the film were toned down--not least of which was the title, which was supposed to have been It Ain't No Sin.

William B. Davidson
as Ernest Brown

Irving Pichel
as Bob, the Attorney

News & Interviews for I'm No Angel

Critic Reviews for I'm No Angel

Audience Reviews for I'm No Angel