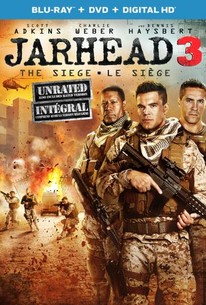 A Marine on his first assignment becomes enmeshed in a global crisis in Jarhead 3; The Siege, a gripping action adventure coming to Blu-ray(TM) combo pack, DVD and Digital HD on June 7, 2016, from Universal Pictures Home Entertainment. Inspired by the modern-day military classic, the film features original Jarhead star Dennis Haysbert ("24," Ted 2), as well as Charlie Weber ("How to Get Away with Murder," "90210") and Scott Adkins (The Bourne Ultimatum, The Expendables 2) in an all-new film from Universal 1440 Entertainment. The Blu-ray(TM) combo pack, DVD and Digital HD also feature an unrated version of the movie plus an exclusive inside look at the making of the film! Assigned to protect a seemingly safe U.S. Embassy in the Middle East, elite Marine Corporal Evan Albright (Charlie Weber) thought he wasn't going to see much action. But when a hostile and extreme military group launches a surprise attack aimed at killing an Embassy informant, Albright's team is caught off guard. Out-gunned and outnumbered, the Marine's routine assignment escalates into an all-out war. With national security at stake, an international crisis ensues in this riveting film directed by William Kaufman (The Hit List) starring Dennis Haysbert and Scott Adkins. Jarhead 3: The Siege also stars Tom Ainsley ("The Royals"), Erik Valdez ("Graceland"), Sasha Jackson (Journey to the Forbidden Valley), Romeo Miller (Madea's Witness Protection), Joe Corrigall (Kilo Two Bravo), Hadrian Howard ("Sons of Anarchy"), Charlie de Melo ("The Interceptor") and Dante Basco ("Avatar: The Last Airbender").

Critic Reviews for Jarhead 3: The Siege

Audience Reviews for Jarhead 3: The Siege