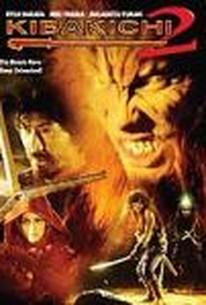 A wandering warrior in search of a worthy adversary gets more than he bargained for when he is forced to do battle against a powerful evil threatening to consume the land in director Daiji Hattori's horrific, genre-bending swordplay flick. Upon meeting the warrior Kibakichi, the ruthless Sakuramaru believes he has finally met his match. Sakuramaru isn't the only one looking to pick a fight with Kibakichi though, and as Sakuramaru attempts to clash swords with the capable ronin, a beautiful samurai werewolf named Anju is seeking to settle a score with Kibakichi for destroying her village. When a powerful evil sweeps the land under in the form of malevolent wizard Dogan-Sama and his loyal army of brainwashed soldiers, however, Kibakichi, Sakuramaru, and Anju are forced to cast aside their differences for the time being and focus their forces on defeating a monstrous force of death and destruction. ~ Jason Buchanan, Rovi

There are no critic reviews yet for Kibakichi 2. Keep checking Rotten Tomatoes for updates!

There are no featured audience reviews for Kibakichi 2 at this time.