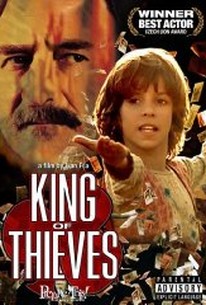 A destitute child from an impoverished Ukrainian village finds that the world can be a cold and cruel place after being lured from his home by a nefarious huckster under the guise of working in the circus. Barbu is a ten-year-old boy whose dreams of a brighter future find him slowly falling for the hollow promises made by shady promoter Caruso. Though Caruso regularly descends upon the town to seduce gullible children with promises of fame and fortune in the West, the truth about what actually happens to Caruso's children couldn't be more tragic. When Barbu is lured to Berlin and sold to a gang that uses children for stealing, the strong-headed youngster soon determines to make the best of his situation and become the best thief in the bunch. His quest to become the King of Thieves is sidetracked, however, when after learning that Caruso has sold his older sister Mimma to a Berlin brothel, Barbu determines to rescue his sister from a grim future of forced prostitution. ~ Jason Buchanan, Rovi

There are no featured audience reviews for King of Thieves (König der Diebe) at this time.