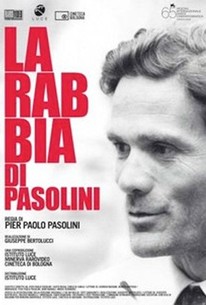 Pier Paolo Pasolini and Giovannino Guareschi's 1963 La Rabbia (Rage) began life as an essay film sans Guareschi's involvement. Pasolini's 50 minutes of material filter numerous social issues through a Marxist lens, including bourgeois hypocrisy, racism, and complacency - as the director cuts to footage of such controversial events as exploitation in the Congo and mid-1950s atomic testing, The film ran into considerable problems during its production, however, thanks to the interference of its producer, the provocateur Gastone Ferrante. Ferrante wanted to turn the opus into a two-installment omnibus film, and tapped the right-wing filmmaker Guareschi shoot and edit in a similar format. The producer then stitched the Pasolini and Guareschi episodes together to create one feature length film - thereby pitting extreme rightwing and extreme leftwing sentiments against one another - and infuriating Pasolini. Even so, the picture was released and bombed at the box office, then fell out of distribution for nearly five decades. This version, titled simply La Rabbia, runs 104 minutes; in 2008, a second, reconstructed version was supervised by Giuseppe Bertolucci, that omits the Guareschi portions. It is titled La Rabbia di Pasolini.

Giorgio Bassani
as Voice Over, Part 1

Renato Guttuso
as Voice Over, Part 1

There are no featured audience reviews for La Rabbia at this time.