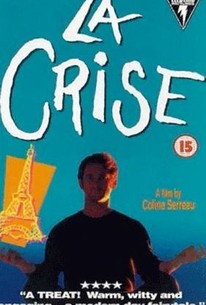 In this comedy, Victor thought he really had it bad when he lost his wife and his job on the same day. However, when he tries to get some sympathy from his friends, he discovers just how bad things can get, because although everything seems to be just fine with their lives, they are incredibly angry. It seems that, just beneath the surface, everyone's cozy situation is about to fall apart, and they know it. Children are acting up, wives or husbands are just about to leave, and there is nothing much to smile about. Desperate for some comfort, he goes to a bar and has a few drinks. There, he meets the one person he's encountered so far who doesn't seem to be mad at the world: a seemingly simpleminded man with no home, no job, and no prospects of getting either. He allows his new human mascot to accompany him while he goes to visit his parents and is distressed to find that his mother is leaving his father for a much-younger man.

There are no featured audience reviews for La Crise (The Crisis) (Crisis-Go-'Round) at this time.