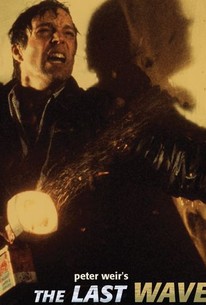 Peter Weir directed this illusory examination between "reality" and "dream-time" and a possible coming tidal wave that will destroy the world. Richard Chamberlain plays David Burton, a young Australian lawyer who is asked by Legal Aid to represent four Aboriginal youths who are accused of killing another Aborigine in a drunken brawl. Burton accepts the case, and he then proceeds to have a series of dreams in which one of the four defendants is trying to give him a sacred stone. As layers of reality are peeled away, Burton discovers that the killing was in retribution for the murder victim's theft of sacred stones. The stones resembled the one in Burton's recurring dream. Finally, Burton discovers that the murder weapon was neither a gun nor a knife, but a shaman's sacred bone -- the shaman pointed the bone at the victim and the victim died of a heart attack. As Burton unravels the case, he finds himself becoming more and more a part of the Aborigine's dream-time until realizing that he is a psychic member of an ancient Australian tribe that had disappeared long ago.

Tony Llewellyn-Jones
as Guest at party

Critic Reviews for The Last Wave

Audience Reviews for The Last Wave