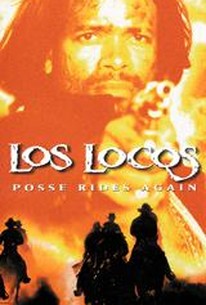 Mario Van Peebles wrote, produced, and starred in this follow-up to his 1993 Western Posse. Chance (Van Peebles) is a cavalry scout in the old west who accidentally gives his battalion wrong directions going into a battle. Not being a forgiving bunch, the soldiers beat Chance, tar and feather him, and leave him to die in the desert. However, Chance is found by Buck (Paul Lazar), who asks him if he's the young god Icarus, who fell to Earth after flying too close to the sun. It seems that Buck is an inmate at an insane asylum that's part of a nearby convent; Chance is brought back to the convent, where the nuns nurse him back to health. Chance learns that the Mother Superior (Jean Speegle Howard) is in poor health, and she asks Chance to lead the nuns and their charges to a safer mission 100 miles across the arid plains. Mother Superior dies only a few hours later, and the cruel Sister Drexel (Rusty Schwimmer) takes charge of the flock. Not eager to take her abuse, Chance goes his own way, but when he encounters the disturbed men of the convent, led by the self-proclaimed President (Rene Auberjonois), he realizes that he must help them if they are to survive. Los Locos was also distributed as Los Locos: Posse Rides Again, though while both are set in the old West and star Mario Van Peebles, he does not play the same character and the two films have no narrative connection.

Brian "Skinny B" Lewis
as Thomas

Robert May
as Jimmy

Ted Parks
as One Eye

There are no critic reviews yet for Los Locos. Keep checking Rotten Tomatoes for updates!

There are no featured audience reviews for Los Locos at this time.