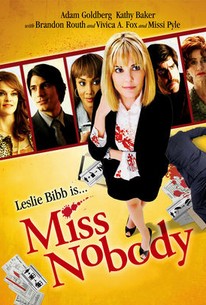 A sweet young woman trying to get ahead in the workplace gets in touch with her inner homicidal maniac in this dark comedy from filmmaker Tim Cox. Sarah Jane McKinney (Leslie Bibb) has been working as a secretary at Judge Pharmaceuticals for years, and she's eager to earn better pay and more prestige. Standing between Sarah and a promotion is Milo Beeber (Brandon Routh), her creepy boss who doesn't think she deserves a better job. One day, Sarah is fending off Milo's unwanted sexual advances when she accidentally kills him; Sarah not only gets away with the crime, but she's advanced into a new job. Sarah figures that since murder worked once, she might as well try it again, and as her superiors bite the dust, Sarah slowly but surely rises to a position of power within the corporation. But as police detective Bill Malloy (Adam Goldberg) investigates the workplace homicides, Sarah wonders if she's done enough to cover her tracks; she also finds herself becoming infatuated with the cop who could put her behind bars. Also featuring Vivica A. Fox, Kathy Baker, David Anthony Higgins and Eddie Jemison, Miss Nobody received its world premiere at the 2010 Seattle International Film Festival.

Vivica A. Fox
as Nan Wilder

Critic Reviews for Miss Nobody

There are no critic reviews yet for Miss Nobody. Keep checking Rotten Tomatoes for updates!

Audience Reviews for Miss Nobody