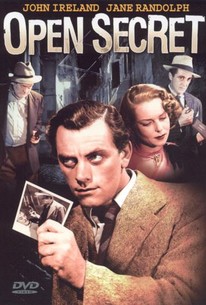 Photographer Paul Lester (John Ireland) and his wife, Nancy (Jane Randolph), are invited to share an apartment with Paul's ex-army buddy Ed Stevens. They arrive to find Stevens gone, and a mysterious phone call gets Paul to the other end of town. While he's away, Nancy is assaulted by a would-be burglar. Paul thinks there's something more going on than a missing persons case or a burglary and tries to interest Detective Frontelli (Sheldon Leonard) of the police department in looking into it, but Frontelli is initially skeptical. When Stevens turns up under the wheels of a truck along with evidence tying him to an earlier hit-and-run murder, Paul is certain that there's some kind of organized conspiracy afoot. What he finds is a town slowly coming under siege from a secret band of anti-Semitic thugs masquerading as a patriotic organization, with whom Stevens had been involved and tried to quit. Paul and Nancy's situation goes from bad to dangerous when they accidentally stumble upon evidence that could hang the murderers.

There are no featured audience reviews for Open Secret at this time.