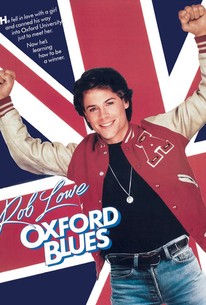 This is an uneven modern remake of A Yank at Oxford (1938) from writer-director Robert Boris, the man behind such diverse earlier productions as Some Kind of Hero (1981) and Doctor Detroit (1983). Rob Lowe stars as Nick Di Angelo, an American hustler and parking attendant in Las Vegas who falls in love at first sight with a beautiful, classy British woman, Lady Victoria (Amanda Pays). He follows her back to England and learns that she is a student at the prestigious Oxford University. Intent on wooing the object of his affection despite their obviously different locations in the social strata, Nick manages to finagle his way into an admission at the school by paying a computer hacker for some illegal tampering. With his arrogant manner and self-centered worldview, Nick quickly offends nearly everyone he encounters, except fellow American expatriate Rona (Ally Sheedy), who becomes his only friend. Nick also secures a spot on the rowing team, an experience that builds his character. A typical example of the mid-'80s "Rat Pack" film, Oxford Blues featured a soundtrack with several forgettable rock songs written expressly for the movie, interjected at intervals into the narrative through music video-style sequences.

Laura Francis
as Girl in T-Shirt

Richard Pescud
as Male Secretary No. 1

Hugh Morton
as Butler
View All

There are no critic reviews yet for Oxford Blues. Keep checking Rotten Tomatoes for updates!