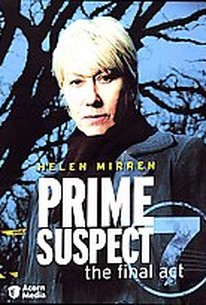 Produced and aired in 2006, the final, four-hour installment of the 15-year Granada/WGBH television series Prime Suspect -- entitled Prime Suspect: The Final Act -- nominally continues to follow author Linda La Plante's literary character, Detective Superintendent Jane Tennison (Helen Mirren), but segues dramatically away from Tennison's casework and toward incidents and developments from her private life. This alteration reshapes Prime Suspect, in its concluding installment, from a detective mystery program centered around hot-button social issues (child molestation, bigotry, gender bias) into more of a domestic drama with an incidental detective subplot. The tale opens with Tennison poised on the edge of retirement, with only a few weeks of work ahead of her. In her off time, she struggles to care for her dying father (Frank Finlay), and battles her own periodic blackouts, brought on by encroaching alcoholism. The central crime plot involves Tennison's attempts to pinpoint those responsible for the sudden death of a pregnant teenage schoolgirl and bring the unsavory characters to swift justice. As she investigates, she comes into increasing contact with the girl's family, and begins to perceive the broken relationship that existed between the victim and her deeply dysfunctional father (Gary Lewis); she also befriends Penny, the best friend of the deceased -- a relationship that imparts her with much-needed insight into the case at hand. ~ Nathan Southern, Rovi

There are no featured audience reviews for Prime Suspect 7: The Final Act at this time.