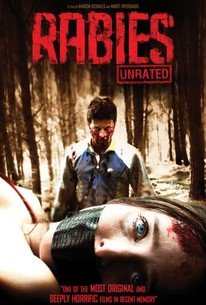 Strange things are happening to a handful of people lost in the woods in this offbeat horror film from Israeli filmmakers Aharon Keshales and Navot Papushado. Tali (Liat Har Lev) has become trapped in a stretch of mine shaft that hasn't been used in years, and her brother Ofer (David Henry) is desperate to free her, in part for the sake of her safety and partly in fear of their parents learning their shocking secret. Tennis players Adi (Ania Bukstein) and Shir (Yael Grobglas) are en route to a match with Mike (Ran Danker) and Pini (Ofer Shechter) when a short cut goes wrong and they end up lost. Menashe (Menashe Noy) is a forest ranger who senses things are not quite right while talking his dog for a walk. And Dani (Lior Ashkenazi) and Yuval (Danny Geva) are a pair of clumsy police officers patrolling the area. Ofer flags down the tennis players for help, and before long the cops and the forest ranger show up. As this group of strangers try to deal with the immediate crisis, they soon discover a serial killer is on the loose, and deadly violence is appearing in unexpected places. Billed as the first Israeli slasher film, Kalevet (aka Rabies) received its North American premiere at the 2011 Tribeca Film Festival, where it screened as part of the Cinemania program. ~ Mark Deming, Rovi