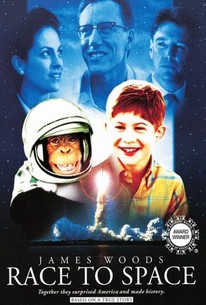 A chimp helps bring together a boy and his father -- as well as putting America in the lead of the space race -- in this drama, which was inspired by the true story of the Mercury-Redstone 2 mission in 1961. Dr. Wilhelm von Huber (James Woods) is a German expatriate scientist living in the United States in the early '60s who has been hired by the fledging National Aeronautics and Space Administration to help America launch its newly formed space program. Von Huber is recently widowed, and his son, Wilhelm II (Alex D. Linz) -- known as Billy to most of his friends -- is still dealing with the loss of his mother. The often cold and exacting Dr. von Huber is having trouble reaching out to his son, and Billy is having a hard time making friends at his new school in Florida. One day, while dropping by NASA's labs to visit his father, Billy discovers a secret: NASA has previously been using unmanned missiles in their tests, but before taking the giant step of sending a man into space, they're going to try an experimental mission with a chimpanzee on board to get a better idea of how people might be affected by space travel. Dr. Donni McGuinness (Annabeth Gish), NASA's head veterinarian, makes a deal with Billy: If he promises not to tell anyone about NASA's secret project, she'll give him a part-time job helping to train Mac the Chimp for his big flight. Billy soon becomes quite attached to his new friend Mac, and discovers it's harder than he imagined to send him into space without knowing if he'll come back safely. Race to Space also features William Atherton and William Devane, while Tyler the chimp appears as Mac.

Critic Reviews for Race to Space

Audience Reviews for Race to Space

There are no featured audience reviews for Race to Space at this time.