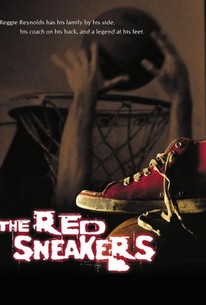 Actor and dancer Gregory Hines directed this fantasy fable, in which he cast himself in a supporting role. Reggie Reynolds (Dempsey Pappion) is a 17-year-old high school student who earns good grades, gets along well with his friends and family, and is the manager of his school's basketball team. Reggie would rather play on the team than sit on the sidelines, but unfortunately Reggie has no knack for the game, which is especially frustrating since two of his best friends, Khalil (Cabral Richards) and Roscoe (Chris Collins), can shoot hoop like nobody's business. One day, a frustrated Reggie meets Zeke (Gregory Hines), a friendly junk dealer who gives Reggie a pair of ancient red high-top basketball shoes, which he says once belonged to Willie Slokum, a star of the Negro basketball leagues in the 1930s. Reggie doesn't think much of Zeke's story until he tries on the shoes -- and discovers he's suddenly playing like a champ. Reggie soon becomes the star player on the school's basketball team, and earns the respect of his fellow players (as well as the attention of some of the prettiest girls in school). But Reggie is also pursued by Mercado (Vincent D'onofrio), a promotions man for a major athletic shoe company; he's willing to offer Reggie a lot of money to switch shoes, but Reggie doesn't want anyone to know that without the magic sneakers, he'll be back to riding the bench. The Red Sneakers also features Vanessa Bell Calloway, Ruben Santiago-Hudson, and Linda Carter.

Linda Carter
as Principal
View All

Critic Reviews for The Red Sneakers

Audience Reviews for The Red Sneakers

There are no featured audience reviews for The Red Sneakers at this time.