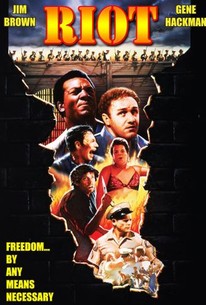 A desperate group of convicts stage a minor riot to divert attention in an escape attempt. Red (Gene Hackman) and two others perpetrate the uprising, but word has leaked out and the riot is quickly changed into a symbolic protest against prison conditions and alleged cruelty by sadistic guards. Cully (Jim Brown) is the convict who is caught up in the riot of which he had no prior knowledge. As the prisoners take over the institution, a drunken party is hosted by two homosexuals in drag. The prisoners set up a mock court in which prison informers and guards are tried, convicted and brutally punished. Knives slash, fists fly and blood is spilled leading to the return of the vacationing warden. Red becomes the media spokesman for the group as the siege continues and the prisoners administer their own macabre brand of justice to those found guilty. The film is based on an actual riot that took place in Minnesota, an event that is chronicled in the novel by Frank Elli. An aura of authenticity is provided by real-life warden Frank A. Eyman, who added his personal experience to the realistic prison escape saga.

Frank A. Eyman
as The Warden
View All