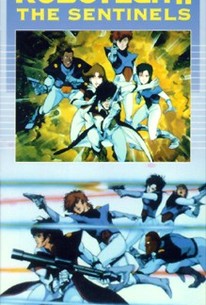 Robotech is the American title given to three different Japanese "anime" television series, bundled together for TV-syndication purposes. Set in 1999, the 36-episode Macross introduced the extraterrestrial Robotech Masters. Southern Cross detailed the adventures of space soldier Dana Sterling of the Armies of the Southern Cross; the English-language version linked this series with Robotech by claiming that Dana was the daughter of two Robotech principals. The last chapter in this saga, originally titled Genesis Climber Mospeda, found Robotech hero Rick Hunter rallying the Robotech Expeditionary Force to ward off another invasion of the earth; this one ended with virtually the entire Expeditionary Force being decimated, forcing survivor Scott Bernard to carry on with a group of Earthbound misfits. The feature-length cartoon Robotech 2: The Sentinels, expands upon the events in Genesis Climber Mospeda, and also fills in story gaps left unplugged in Macross and Southern Cross. The heroes and heroines pile into spaceship SDF-3 to keep the peace in a faraway star system; meanwhile, an alien race destroys the Robotech masters. If you want to know the outcome, get Robotech 2: The Sentinels; the labyrinthine, multicharacter storyline might well blow out our word processor if we were to go into further detail.

Steve Kramer
as Tesla/Jirl
View All

There are no critic reviews yet for Robotech II: The Sentinels. Keep checking Rotten Tomatoes for updates!

There are no featured audience reviews for Robotech II: The Sentinels at this time.