Shadow of the Sword 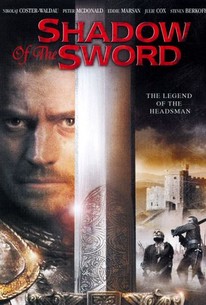 Shadow of the Sword

Shadow of the Sword Photos

Also (and more pointedly) entitled The Headsman, Simon Aeby's scope period drama Shadow of the Sword uses its narrative to explore conflicts and tensions during the notorious 16th century Inquisition. Nikolaj Coster Waldau and Peter McDonald play Martin and Georg, two men who meet and bond as youths in a European monastery, then part ways and diverge paths; Georg becomes a cleric at a nearby abbey, Martin a soldier in the Army. The adult men reconnect following a fifteen year absence, and not long after, Martin (in the face of overwhelming dissuasion from Georg) falls head over heels in love with Anna - a social outcast because of her father's role as executioner. Martin and Anna marry, and - in a beat that recalls Berlanga's El Verdugo - Martin is forced to enter his father's line of work as a decapitator - a role he performs fluidly and effectively. Trouble brews, however, on two fronts: from Fabio, a handicapped local who covets Martin's new job, and from an Inquisitor (legendary playwright Steven Berkoff) who arrives to oversee George's execution when the local archbishop grows dissatisfied with him - forcing Martin to step in and act as George's salvation. Meanwhile, Brother Bernhard schemes to rob the church of stability.

John Shrapnel
as Archbishop
View All

Critic Reviews for Shadow of the Sword

Audience Reviews for Shadow of the Sword

There are no featured audience reviews for Shadow of the Sword at this time.

Shadow of the Sword Quotes