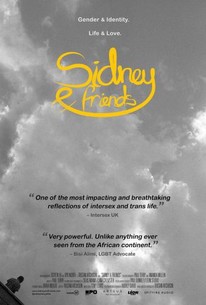 When his family tries to kill him, Sidney, who is intersex, flees to Nairobi where he meets a group of transgender friends. Together, they fight discrimination and discover life, love and self-worth. Sidney grew up in rural western Kenya. He didn't like wearing skirts or doing chores that girls are traditionally supposed to do, preferring herding cattle and playing football. Sidney was born intersex, but Sidney only knew he was different. Growing up, he found these differences increasingly made him stand out in the community, a source of concern to family members that manifested itself into chastisement, castigation, and hate. His family say he is possessed by demons, demons that make him want to become a man. When Sidney fled from his family's prejudice, he was forced from slum to slum, stripped in public and beaten. His life changed when he eventually met a group of transgender friends. For the first time in his life, Sidney was no longer alone... Feature documentary Sidney & Friends is a heartfelt exploration of the hopes, dreams, and everyday reality of a group of intersex and transgender friends fighting to survive on the edge of Kenyan society. Join Sidney and his new friends as they share what it is like to grow up and live as a gender minority, in a region known for prejudice and discrimination against its LGBTI population. Filmed over 3 years, our friends reveal the secrets of their struggles with poignancy and sometimes also humour. The premise is simple; it's about gender, friendship...and love.

There are no featured audience reviews for Sidney & Friends at this time.