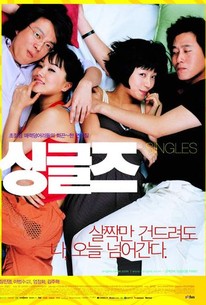 Na-nan (Jang Jin-yeong of The Foul King) is nervously approaching 30, unhappy and uncertain about her future. Her boyfriend, realizing that they are just going through the motions, breaks up with her. Her patronizing boss takes credit for her excellent work and has her transferred to the corporation's restaurant division, where one of her responsibilities is to enthusiastically greet patrons at the local Chili's. Her friends, promiscuous playgirl Dong-mi (Eom Jeong-hwa of Marriage Is a Crazy Thing) and the shy, bookish Joon (Lee Beom-su) share an apartment, but there's no romance between them. Joon is seeing a younger woman who strings him along, and he resents Dong-mi's endless procession of lunkheaded boyfriends. Dong-mi has her own problems at work and is eventually driven to take drastic action against her lecherous boss. Na-nan, unhappy at her job, takes notice when Su-heon (Kim Ju-hyuk) begins frequenting the restaurant, always with a special request for her attention. But he doesn't make a move. One night, Na-nan's oafish boss stops by Chili's to "boost sales" and casually insults her, prompting Su-heon to defend her, making his feelings known. Their relationship develops slowly. Na-nan begins to fall for him, only to learn that he's being transferred to the United States and wants her to come with him. Meanwhile, Joon gets dumped and falls into the arms of Dong-mi. They spend a drunken night together that threatens to destroy their friendship. Singles, based on a novel, was directed by Kwon Chil-in, and was shown at the 2004 New York Korean Film Festival. ~ Josh Ralske, Rovi

There are no critic reviews yet for Singles. Keep checking Rotten Tomatoes for updates!

There are no featured audience reviews for Singles at this time.