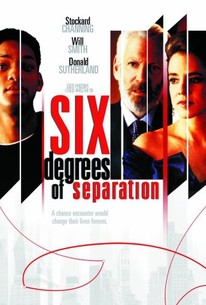 Though it betrays its theatrical roots, Six Degrees of Separation largely succeeds thanks to astute direction and fine performances -- particularly from an against-type Will Smith.

Two socialites find their view of the world changed when a young man takes advantage of their preconceptions in this thoughtful comedy-drama. Flan and Ouisa Kittredge (Donald Sutherland and Stockard Channing) are a married couple who have built highly successful careers as art dealers catering to Manhattan's upper crust. The Kittredges are entertaining friends one evening when a young black man named Paul (Will Smith) appears at their door. Paul says that he's a close friend of their children, with whom he attended boarding school, and he's just been mugged and needs to get off the street for a moment. Flan and Ouisa invite him in, and they are immediately taken by Paul's intelligence and charm; he offers to prepare dinner, regales them with stories about his father, Sidney Poitier, and ends up spending the night at their apartment. However, the next morning Flan and Ouisa discover that they've been had; Paul is actually a con artist from the streets who has been pulling the wool over the eyes of many of their friends -- and his actions are beginning to have serious consequences. John Guare adapted the script from his own successful stage play; the supporting cast includes Ian McKellen, Mary Beth Hurt, Bruce Davison, and Heather Graham. ~ Mark Deming, Rovi

Will Smith
as Paul

Vasek Simek
as Frank the Doorman

Margaret Thomson
as Grandmother at Baptism

Vince O'Brien
as Grandfather at Baptism

Anne Swift
as Guest at Baptism

Richmond Hoxie
as Guest at Baptism

Madhur Jaffrey
as Guest of Honor