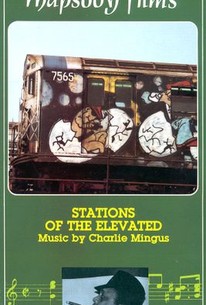 Stations of the Elevated

Stations of the Elevated Photos

STATIONS OF THE ELEVATED (1981) is a 45-minute city symphony directed, produced and edited by Manfred Kirchheimer. Shot on lush 16mm color reversal stock, the film weaves together vivid images of graffiti-covered elevated subway trains crisscrossing the gritty urban landscape of 1970s New York, to a commentary-free soundtrack that combines ambient city noise with jazz and gospel by Charles Mingus and Aretha Franklin. Gliding through the South Bronx, Brooklyn, Queens and Manhattan - making a rural detour past a correctional facility upstate - STATIONS OF THE ELEVATED is an impressionistic portrait of and tribute to a New York that has long since disappeared. STATIONS captures the exuberant height of the 1970's graffiti movement in New York, featuring the work of early legends including Lee, Fabulous 5, Shadow, Daze, Kase, Butch, Blade, Slave, 12 T2B, Ree, and Pusher. At a time when graffiti was largely dismissed as vandalism and a symbol of urban decay, Kirchheimer explores it as a form of self-expression and a reaction to New York's social and economic conditions, an artistic counterpoint to the "legalized vandalism" dominating the city's visual landscape in the form of corporate advertising. Juxtaposing the colorful imagery of 'tagged' cars with shots of hand-painted billboards depicting hamburgers and bikini-clad women, STATIONS forces audiences to ask: "What is urban art, and what role does it play in the daily life of a city?" (C) Artist Public Domain

Critic Reviews for Stations of the Elevated

Audience Reviews for Stations of the Elevated

There are no featured audience reviews for Stations of the Elevated at this time.

Stations of the Elevated Quotes